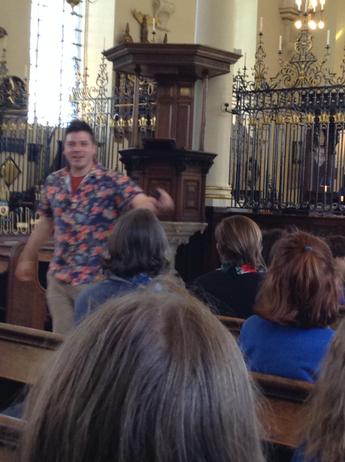 He started the morning by explaining the background to modern slavery, through a presentation and a number of scenarios.  The first question the children were asked to think about was ‘What if two aliens landed on Earth and asked what is this planet like? The group came up with some amazing answers including fun, peaceful, adventurous, the blue planet and then onto seas are full of plastic, terrorism, treating people differently. We talked about how we should treat people the same as we treat ourselves.

Next, the children had to think about their mobile phones or someone who has a mobile phone. How they love it, playing games, taking photos, talking to friends and watching tv. They were then asked how it would feel if the government banned mobiles and everyone had to hand them in. Would they do it straight away or try and hide it for as long as possible. Many said they would keep it as long as possible. So, when slavery was banned in 1807 did it all stop, no. It continued, just like mobile phones continue because we didn’t want to give them up.

We then listened to a really interesting story, which the children are going to tell the whole school about in Collective Worship.

We then went on to talk about capitalism – where a country’s trade and industry are controlled by private owners for profit. We looked at a number of symbols which the children were asked to identify such as Coca Cola and McDonald’s. We started to talk about how Coca Cola started and how big it became.

Our next activity was to think about running a banana company. How do we sell the bananas and keep selling them? The children came up with how we could tell people how healthy bananas are, how we could use boats to transport them all around the world, advertise, sell them with toys (gifts) or sell them with chocolate. If the company then gets bigger and more bananas are sold, more people can be hired to work.

Ok, next question. Who is going to plant the bananas? Pick them? Remember, we have to grow these bananas in hot countries like Africa, Latin America and the Caribbean. Who’s going to know what we pay these people (adults/children) or even if they get paid. Nobody would know. We could make more profit if we gave them very little or nothing at all. Without hesitation they said no that would be wrong, we can’t do that, they need money for food and clothes. They were then told that this is what is happening now all over the world.

We were then asked to think about - Do we know where our food/clothes come from? Who picks them? Who makes them? Packs them?  Do we even care!!!!!!!!! Do we believe these companies are doing the right thing? Are they looking after their workers? How do we know or not know? Do they really show us the real picture? Lots to think about for all of us.

Our discussion then went on to something called ‘Country Lines’, this is where children are used to traffic drugs. They are used as slaves to work for gangs distributing drugs around the country. In 2018 the British police stated that they believed there were around 1,500 drug trafficking routes of this sort in the UK. In 2019 it is estimated that the total turnover is over £500 million. These children are going into a world of crime feeling they have no other options. Phil used his expertise to explain this through the story of ‘Oliver Twist’.

Local language is a struggle

BLAH! is a app where children can chat about anything they need to talk about.

Unfortunately not the ones with chocolate chips.

Some cookies are necessary in order to make this website function correctly. These are set by default and whilst you can block or delete them by changing your browser settings, some functionality such as being able to log in to the website will not work if you do this. The necessary cookies set on this website are as follows:

Cookies that are not necessary to make the website work, but which enable additional functionality, can also be set. By default these cookies are disabled, but you can choose to enable them below: